Apparently I’ve never got round to posting this poem on here, for which, I hope, kind reader, your kindest considerations will agree was an error.

The table set and chairs arranged,
The house is quite completely changed,
Poor Alf (the dad) is running late,
His wife (that’s Mary) in a state.
Three kids now all are ready for
A dinner so soon at the door.
Elizabeth is on the stairs
And shows off grace as no one bears,
Her face lit up as to impress,
All bound upon a new-bought dress.
And then young Jonathan appears,
Politeness shoved into his ears;
That he must do and he must be,
And he must act so perfectly.
The smallest of that awkward set
The nearly-seven-now Yvette,
Is dressed up as her mother chose
In really quite horrendous clothes.
And there below in hopeful poise
Their parents pack away all toys;
The house itself must now be dressed
So even it can look its best.
There’s Mozart playing in the den;
A CD none shall hear again,
The sofas, cleaned, sit proud and bright,
As if they’d eat off those tonight,
A dab of polish has gone round
On every surface that is found,
The dust in every place upset,
(For there was naught they could forget)
The car was cleaned and sat outside
As if that was their only pride,
The kitchen now is out of bounds;
For it’s so clean it just astounds,
And Tuesday’s ‘artwork’ in the sink
Has now been cleaned of Yvette’s ink.
There’s not an atom unrehearsed
For what shall through the front door burst;
Relations this time, friends perhaps?
Some more from church, or office chaps?
The phone is ringing somewhere faint
And Mary makes a loud complaint,
Now Jonathan is hiding quick
(The ‘Well Lost Phone’ is his best trick)
Elizabeth is quite alarmed
That by her dress not one is charmed,
And quietly the house descends
Once more into chaotic ends;
The table’s knocked, some wine is spilt,
Yvette’s now painting green the quilt,
And Mary now, in search alone,
Cries, “Where the hell’s that bloody phone?!”
Elizabeth has changed her skirt,
And Jonathan has stained his shirt,
The phone at least had been retrieved,
And Mary (looking quite relieved)
Removes it slowly to her brow
To hear the soul who’d caused this row;
“Oh hello, dear. How are you? Well?
“I’m sorry, but I’ve got to tell,
“Arthur’s ill and not quite right,
“We can’t make it to yours tonight!”
The phone from duty was released
And Mary, looking slightly pleased,
Sat down beside a potted tree;
Her house was back to anarchy.

I’ve only just got back from a week in Stratford upon Avon, and thought I’d just post a minor question that has been bugging me since I first saw it.

I was lucky enough to visit Kenilworth Castle while in Stratford, and spent a while on the brand new metal stairs that allow visitors to enjoy floors of the castle that have been inaccessible for years.

Aside from the amazing parts of the castle that you can now get to, in among the stones dotted with medieval masons marks, there are swathes of 18th and 19th century graffiti, documenting the bygone trips of curious visitors centuries ago. One particular piece of graffiti, written in a style that can’t date from long after the start of the 1800s, was an exceptional and all too familiar jotting. 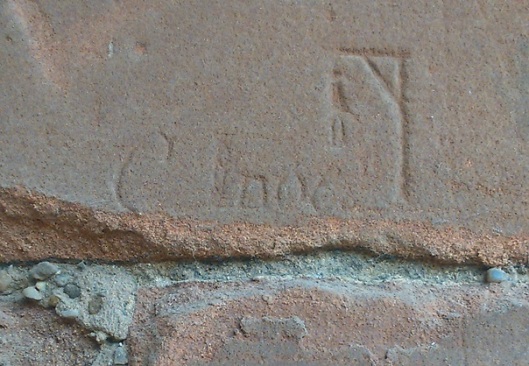 Standing out in the red sandstone was a long-forgotten game of hangman. This is an image of a hanging doodled in a game from a time when public hangings were still common practice, and by someone who may even have seen someone, if not being executed, then perhaps at least hanging in irons and ‘keeping the flocks by moonlight’. A hanging figure would not have been an alien site on the English roadside.

But whoever had the misfortune of having to guess this hangman’s word, their attempts clearly failed, and a mysterious ‘C   noc’ remains under the completed figure in the noose. Whether there was an ‘l’ once also part of the word is hard to say, since later graffiti may have further defaced the mystery. The only words beginning with a C and containing ‘noc’ that are in the dictionary today certainly were not around even a hundred years ago, so what could the word possibly be?

My guess is that the word was mispelt – Chronicle is one of my guesses as to what it could be supposed to say. Since this graffiti may very easilly date to a time before education was commonplace, it is probable that if an uncommon word was chosen for the game then perhaps neither party playing actually knew how to spell it. What an interesting game of hangman that would make!

For now, kind reader, I leave you with that mystery.

Dr Who was good, wasn’t it?