Over the summer I went through some very old pictures that I’d drawn – things from the age of seven upwards – I make no apology for these unhappy crimes against art that I now present. 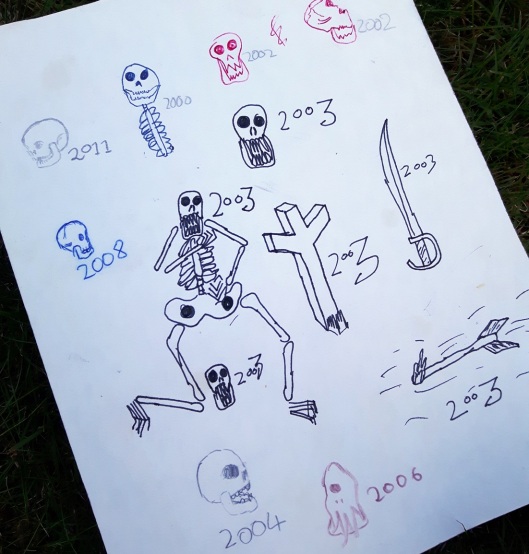 I’ve got a few scraps of paper like these – back when I was in primary school I wrote a lot of short horror stories, so regularly illustrated them with ghosts and skeletons. This scrap of paper ended up getting expanded a bit, and whenever I’ve found it in the past I’ve added a new drawing. The oldest one here – 2000 – would have been when I was eight. 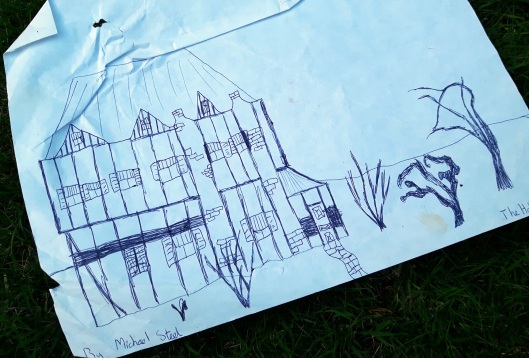 Here’s a haunted house from when I was about ten.

And here’s one in colour – probably when I was about the same age.

This drawing is very frustrating. I found a piece of the crest from a Bellarmine Jar when I was nine or ten and this is a drawing of it – I liked to record my finds this way. I’ve been searching for what happened to this interesting piece of pot for years and had hoped to find it this summer, but it’s still missing.

This illustration of odd finds is something I probably drew when I was about twelve, some of these are missing too. It shows a piece of 17th century pot, a medieval floor tile from Beeleigh Abbey, a lock plate from my grandparents’ house, a piece of jewelry and a statuette from a Victorian tip, a hypocaust tile and tesserae from Caer Went, and a brass loop from Duxford aerodrome. 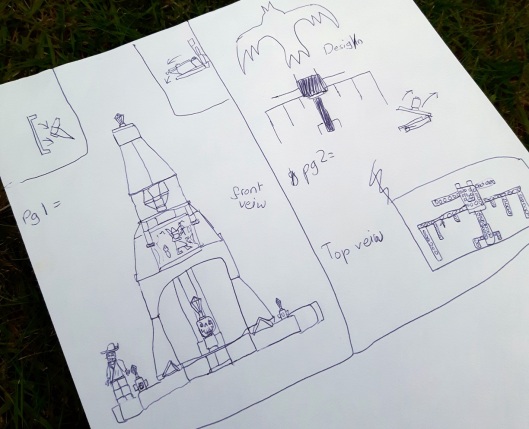 Getting into more technical drawings, this is something I must have drawn when I was ten or so. It’s a plan for a Lego model!

And something even madder: my granddad gave me and my brother some old cupboards and a broken lawnmower one summer to build something out of. Here’s a plan for the plane that we attempted to make, with an explanation of the system to make the propeller turn and control the ailerons. 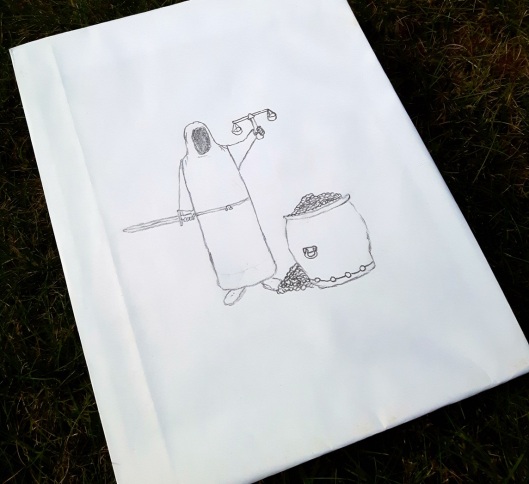 Going back to writing, I wrote my first reasonably lengthy novel attempt aged 13 – some 35,000 words that got me a detention when I gave it in for a writing project piece of homework and my teacher thought I’d just stolen it from the internet. This was my attempt at a cover image for that first one ‘In Half Light’

I wrote plenty of equally awful stories following on in the same fantasy universe up until the age of sixteen or so, this map must be related to one of the last ones that I wrote.

After that I went back to more conventional drawings, including this clock.

Then I began working with pens – this is a drawing of some pirates I drew to impress a girl I liked, I think I was about seventeen. Can’t say it worked, but at least I’ve got a fancy doodle.

And finally, this drawing dated Aug. 2011 would have been when I was 19, just before I went off to university and began filling up sketchbooks rather than odd scraps of paper (I suppose that’ll be a blog post one day). This and the previous one are re-creations of historical scenes from a bit of research and a lot of general guessing. Something that’s come to be a majority of the drawings I produce.